A new year and a clean studio.

Around the beginning of every new year I do a major clean up in my studio. All the shelves of odd bits and mysterious pieces that I have collected get a major tidy up. 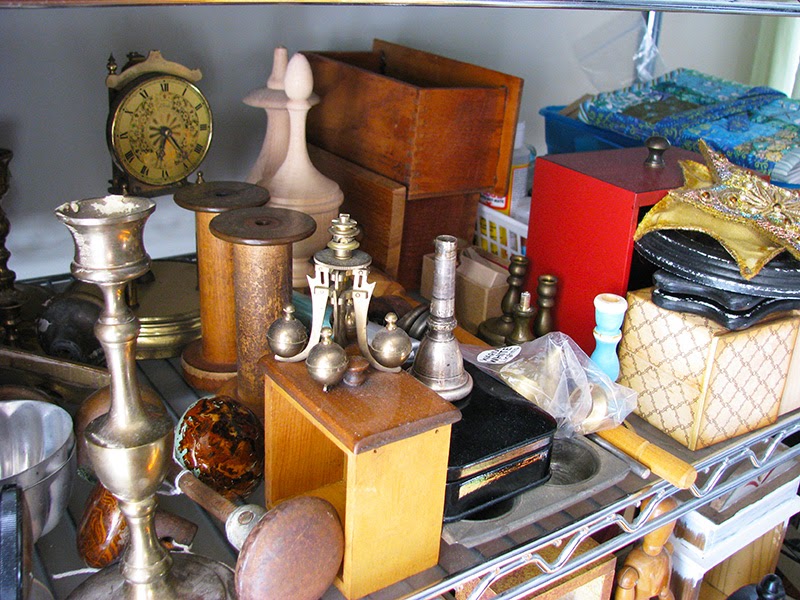 Things that are in progress or getting prepped get a (ahem) dusting off and get moved to the front.
I handle everything because sometimes magic happens when you pick up an old drawer or some clock parts. Those things get put on my work tables so I can handle them some more. I treat these intuitive moments with mindfulness and nurture them as best I can. 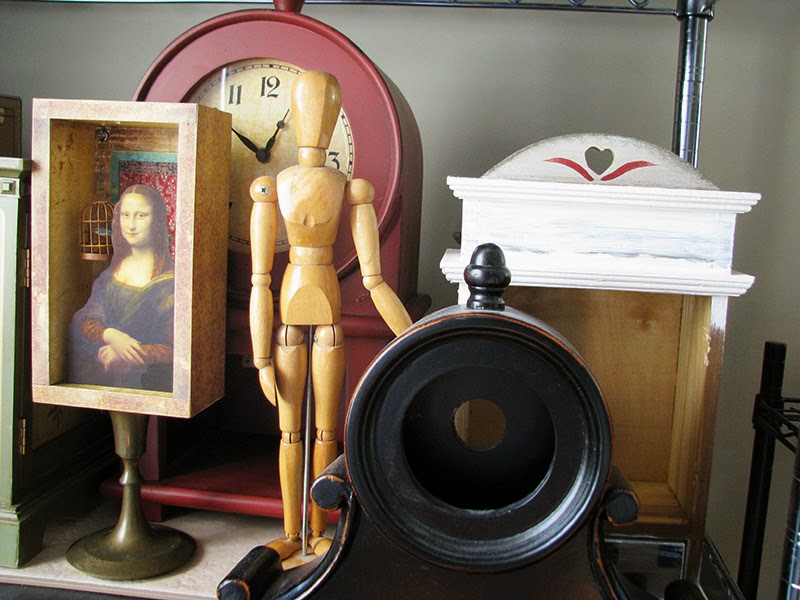 A lot of sorting happens and things that were previously scattered around get put away. 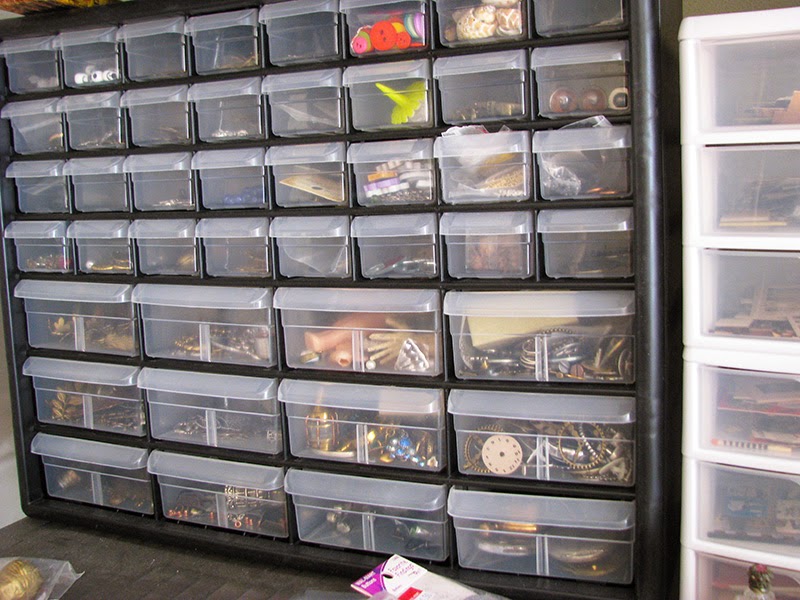 Lost objects are found. I didn't know I had this awesome glitter! 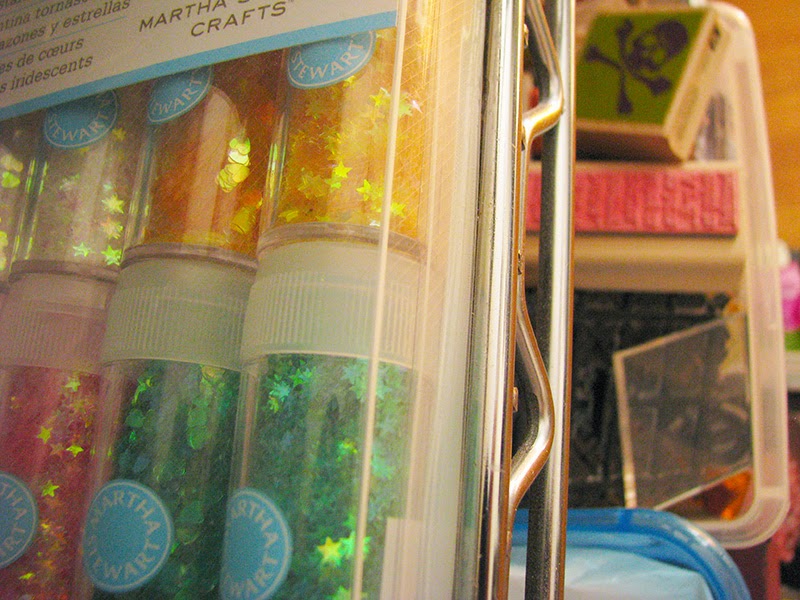 If I don't see something, I forget to use it.....I found these great storage cubes on Amazon for about $6.50 each. You can get them HERE. 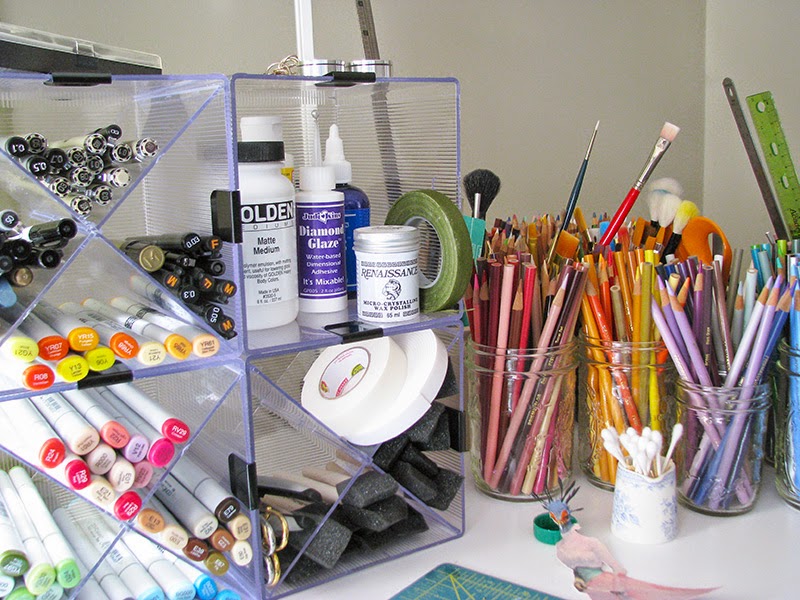 My husband (who I call MacGyver cuz he can make anything) made this wonderful lazy susan for me to store the vast amount of colored pencils I have. You can't have too many colored pencils! 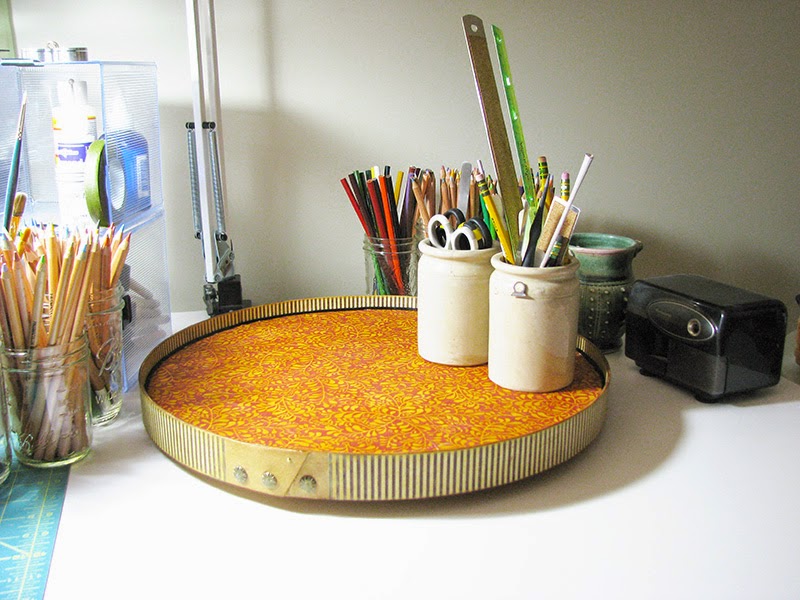 He actually bent the piece of wood that's wrapped around the disc, by getting it wet, wrapping it in plastic wrap and sticking the big, long piece inside our baseboard heat register! After it sat in there long enough, he was able to bend it to the shape of the disc. He is so cool. 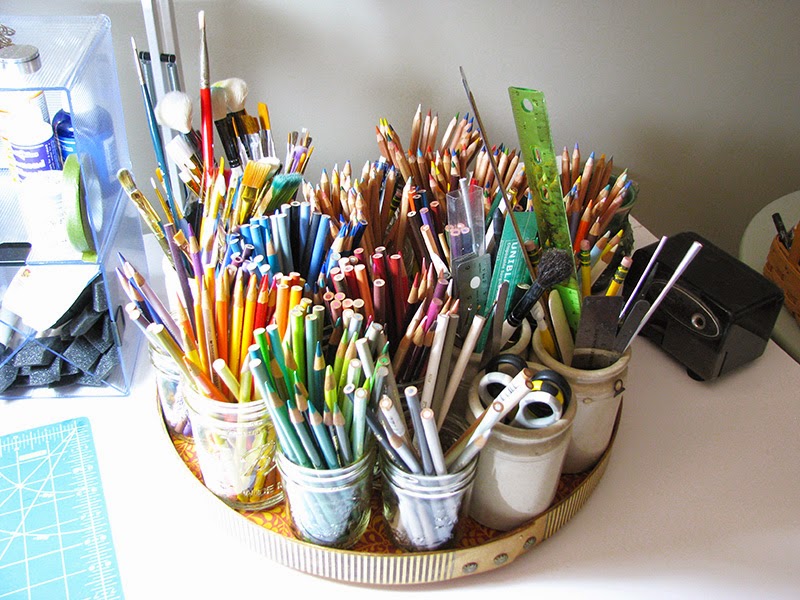 All the fussing and cleaning is worth it, it clears my mind. I feel my spirit lift and I am so much more productive!
Now I've got a wonderful, clean workspace that will stay that way for about thirty minutes. 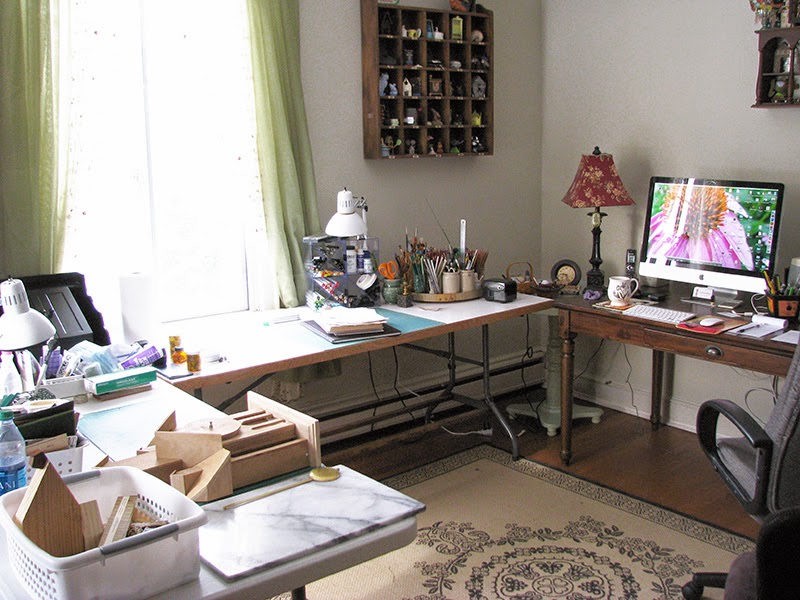 Now if I can just put everything away in a timely fashion.........
Yeah.
We know how that goes!

Some time ago, I was visiting my buddy in Atlanta and we found these little tiny tins on sale at some store or other we were cruising through. They came in a box of twelve and we each bought a set or two, not thinking much about what either of us was going to do with them.
She recently came up with the idea of a 'Tin of the Month Club' and is decorating the most adorable little tins-one for each month. See her tins HERE.
I decided I wanted to play as well, so here are my offerings for January and February. 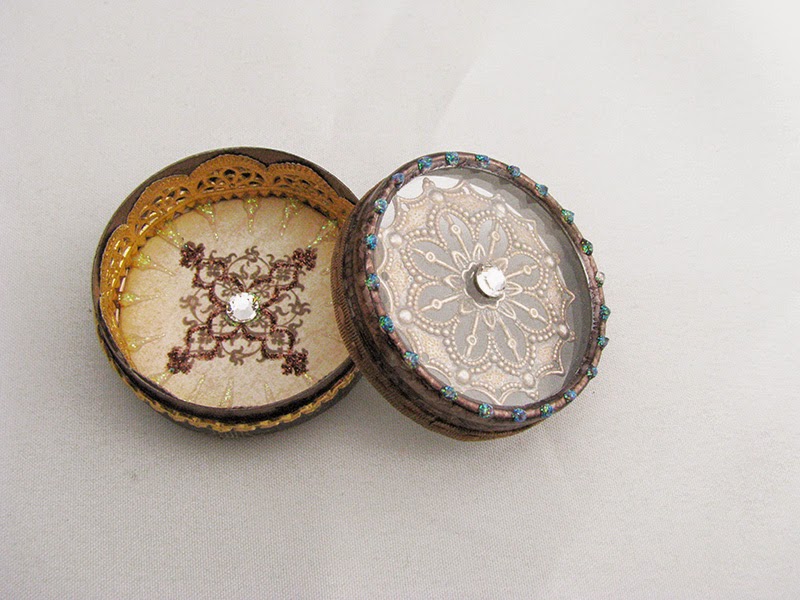 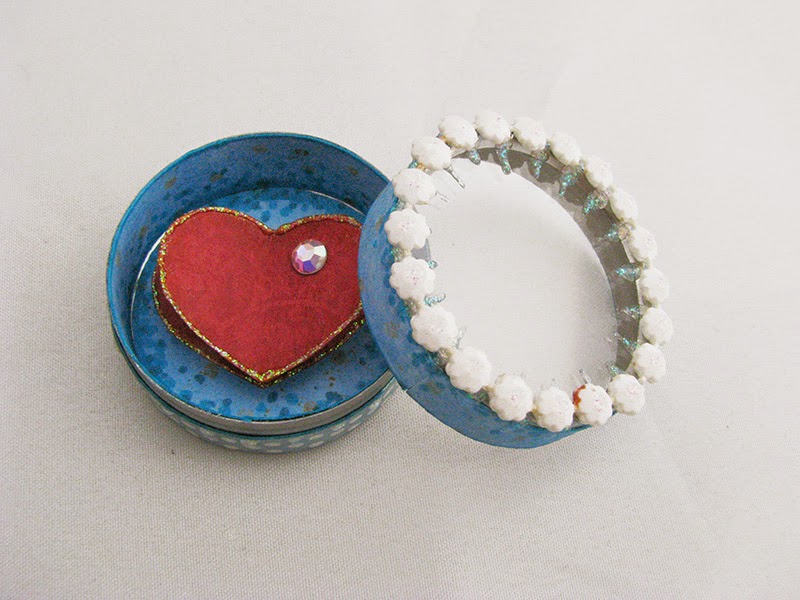 And both of them together ... 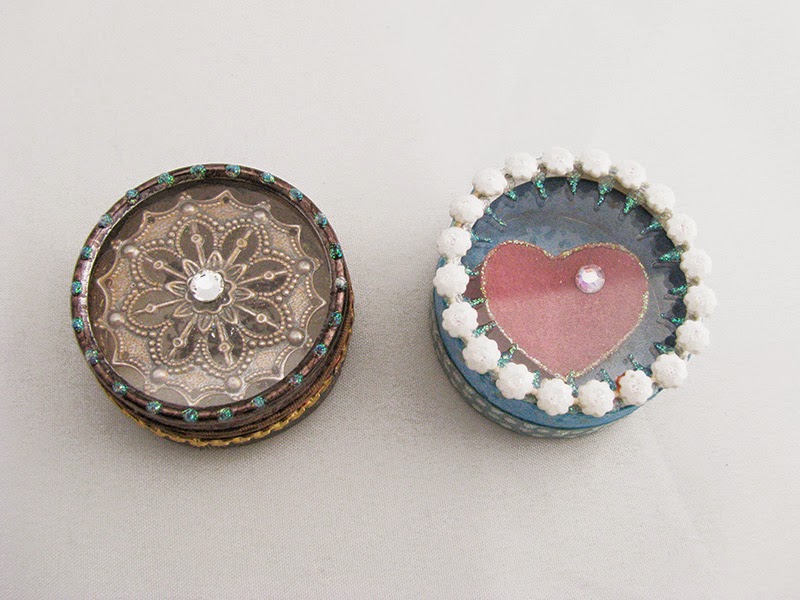 It's really fun playing with small things!
Posted by L Mahaffey at 8:40 AM 4 comments:

Cute as a button

When I was told the theme for February at Alpha Stamps was 'Cute as a Button',  I immediately thought of the book (and movie) written by Neil Gaiman called 'Coraline' and the other mother with her creepy button eyes. 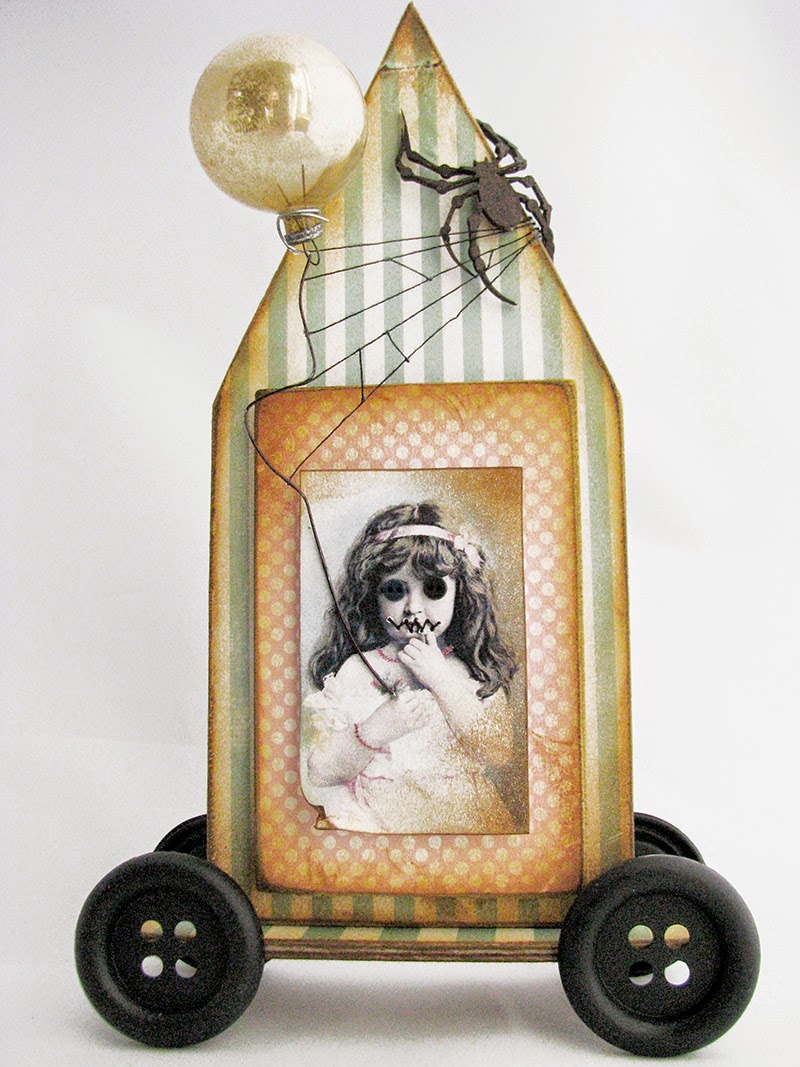 In the book and movie, the other mother wants to sew button eyes on Coraline, but she resists. Oops! Looks like she got one. I have to admit, I creeped myself out with this one. 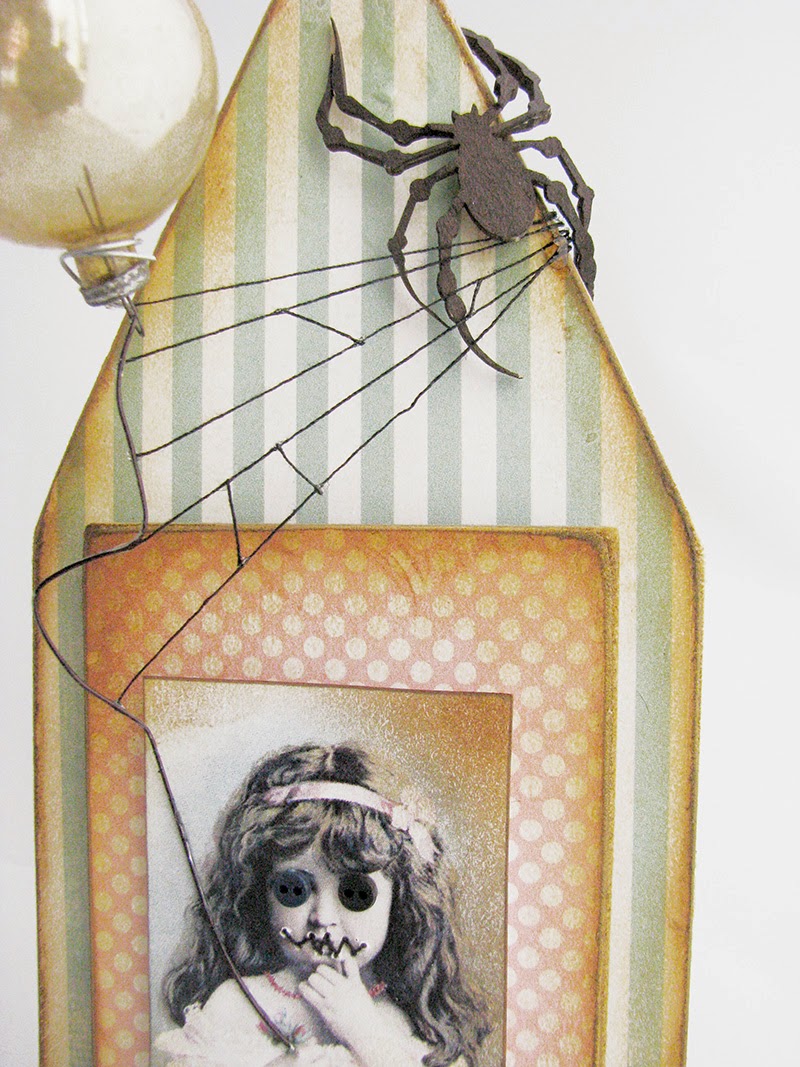 I started out making the house shape from a template I drew and cut the shape out of a piece of sturdy chipboard. I sized the smaller piece of chipboard (covered in the polka dot paper) to the collage image and cut that out as well. I covered both pieces with paper, sanded them down around the edges and inked them up to make them look kind of old and worn.

I glued teeny tiny buttons to the images eys and sewed her mouth shut (ick) with regular needle and thread.
I aged the image the same way as I did the chipboard. 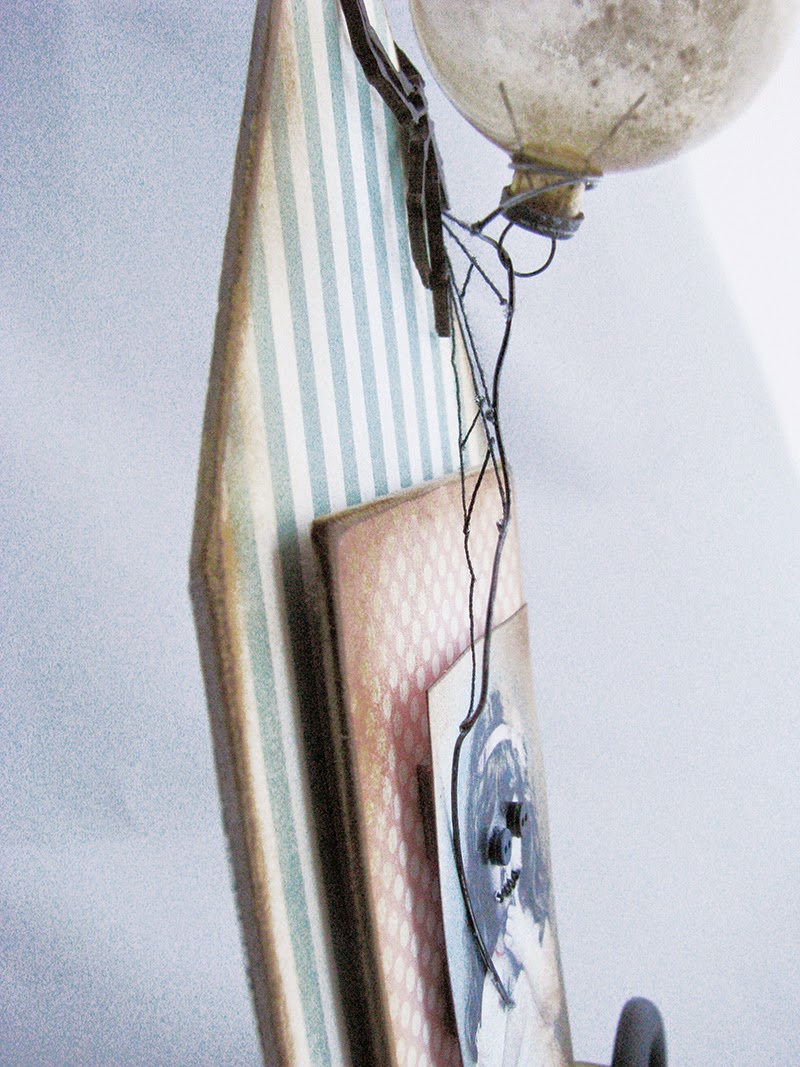 I used foam tape to mount the collage image to the polka dot chipboard and then repeated that to attach the chipboard to the house. 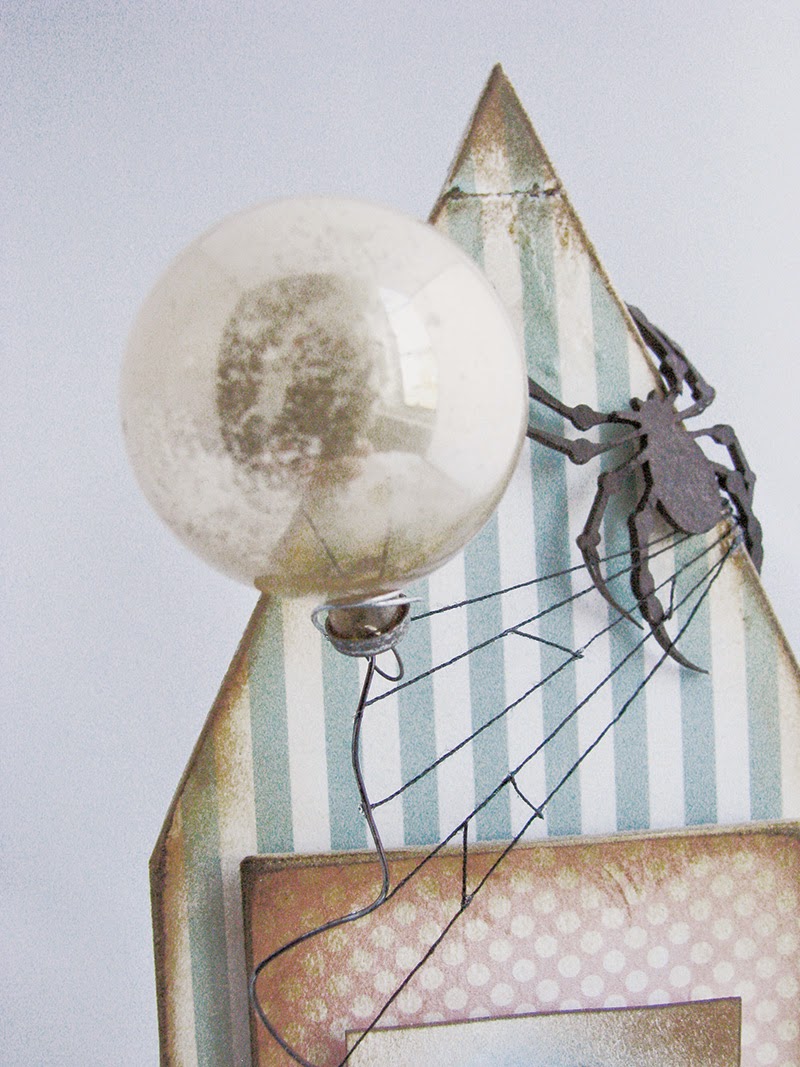 A piece of wire wrapped around an old Christmas ornament makes a great balloon! I glued that down and then very carefully glued the long pieces of thread to the balloon wire. After they dried, I added a bit more glue to the ends just to make sure they were firmly attached.
I gather the threads up and anchored them to the edge of the house with more glue, let them dry, and then using tweezers glued the cross threads of the web down on one end, letting those dry.
After they dried, I glued the other end down and snipped off the extra bits with a pair of nail scissors. 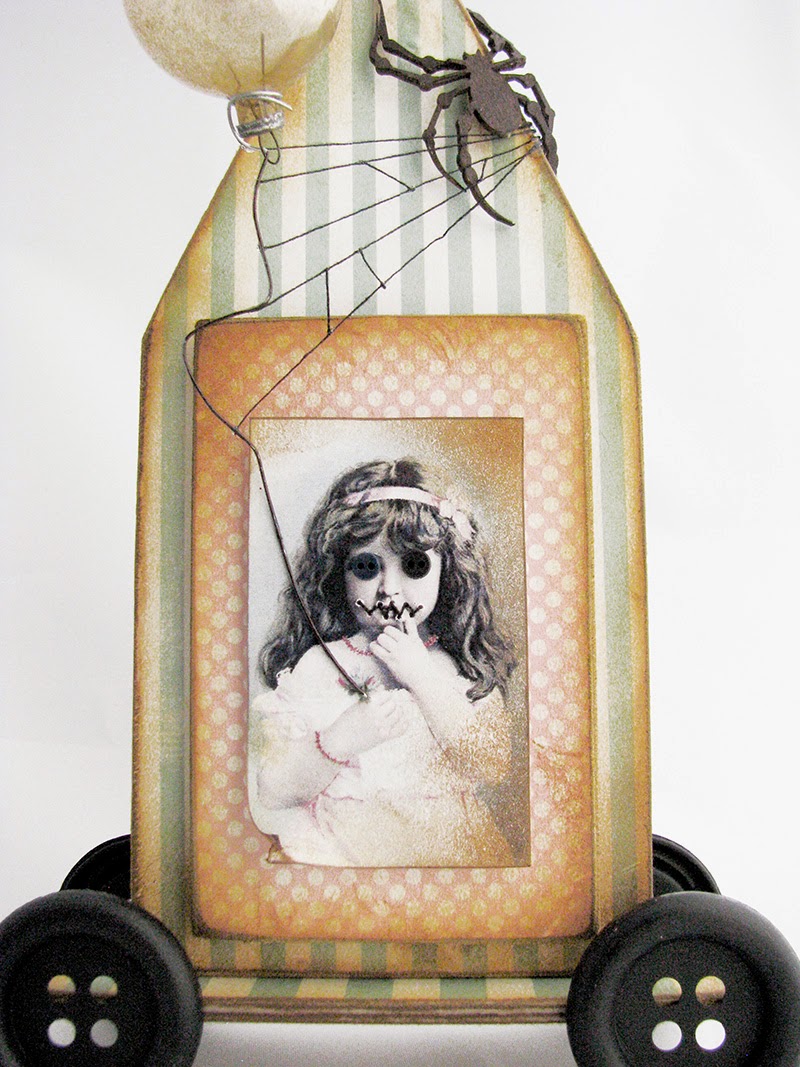 I glued a little wooden block to the back of the piece and mounted it on another piece of paper covered chipboard. I found these big black buttons in my stash, but they were a bit too shiny for me, so I splooshed some matte medium on them and dulled them up nicely and glued them on the piece.
The spider was a chipboard piece I inked black.

For a link to the supplies I used, click HERE.

Thanks for stopping by!