Birds have been the theme running through the month of February over at Alpha Stamps. I've been playing with the new Bird Shadow Box Shrine Kit and having a lot of fun coming up with stuff.

Because I'm a bit of a fantasy fan, I thought it would be fun to make a couple of mechanical bird friends for these two little pixies. The wee things aren't grown up enough to fly on their own, but they have their independence with their bird pals. I bet they can get into a lot of mischief...... 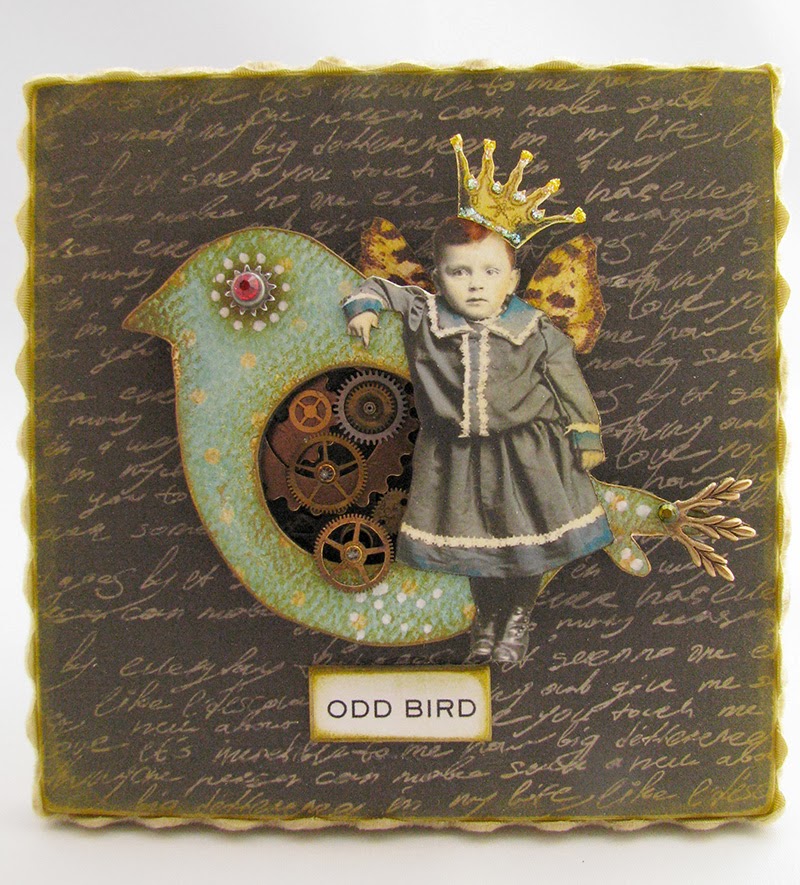 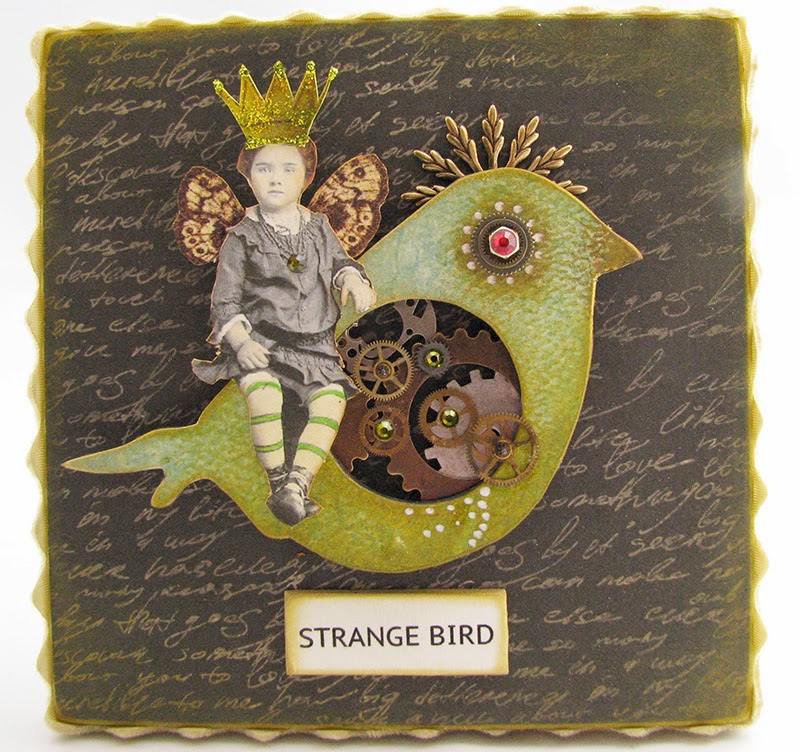 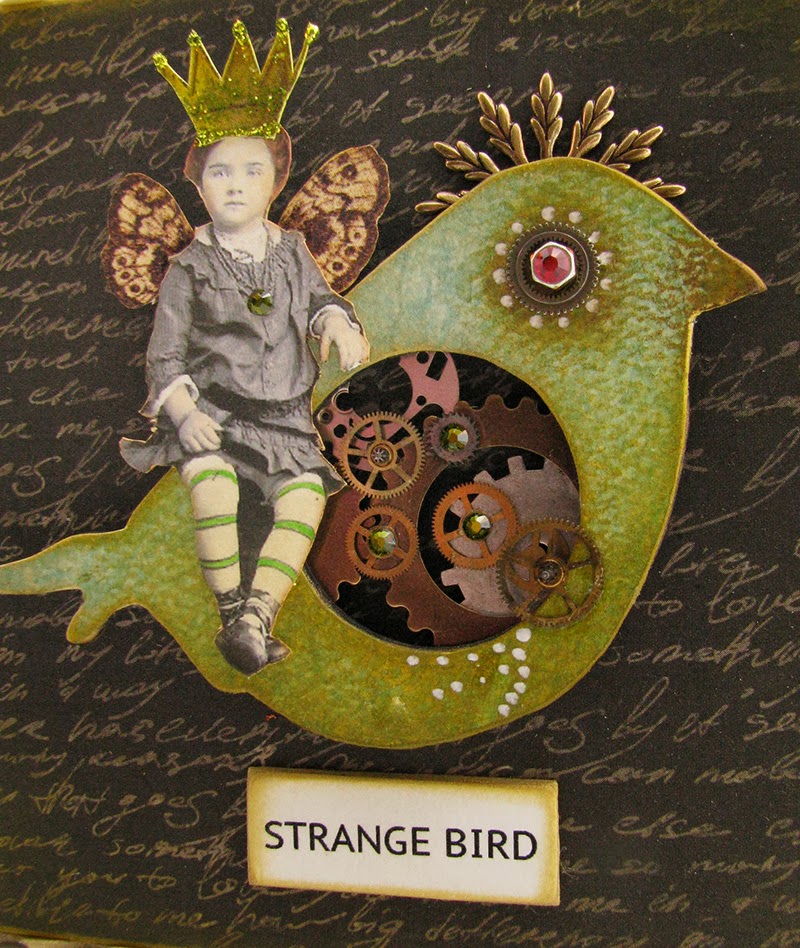 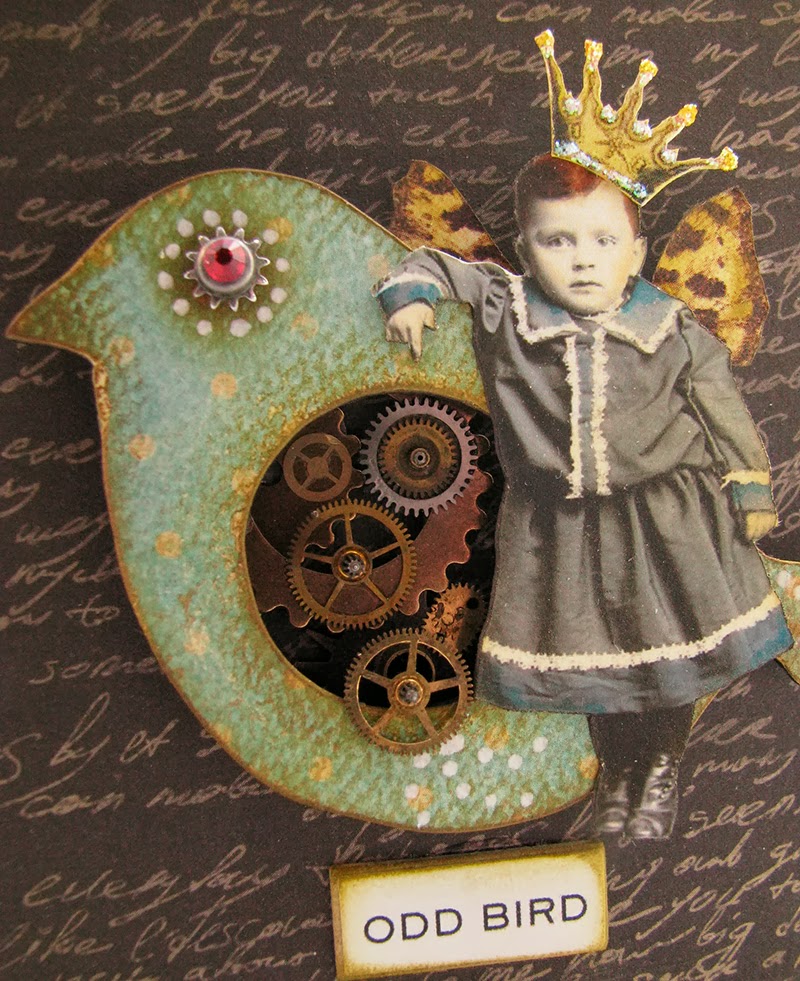 The first thing I did was cover my boards with paper. If you are using chipboard, cut it to size.
When my boards were covered and the matte medium was thoroughly dried, I sanded the edges of each piece, first with a slightly rough grit sanding block, then a finer one to smooth out the edges.

I used the Galaxy gold ink pad around the edges and then the Pearlescent Olive. I just played around with the inks until they looked right.
I did the same thing with the Shadow Box Bird Shrines - covered them, then sanded, then played with the ink pads, giving a little extra emphasis on the beaks, around the edge of the center hole and I rubbed a little around where I planned to put the eye.

Next, I turned the birds over and experimented with where I wanted to place the gears. After I was happy with where the big gears were placed, I glued them on the back side of the birds. After they dried, I turned the piece over so the I was looking at the front, and placed the smaller gears and watch parts where I wanted them, filling in any ugly gaps or placing a piece where it showed nicely.

After things are thoroughly dried, I turned the piece over and gently place double stick foam tape in places where it would support the piece and still remain hidden.
I added two layers to give the piece some depth and to accommodate the thickness of the gears.
I DID NOT remove the paper from both sides of the tape. Only the side touching the bird back.

Next step, I cut out my images, gave the children just a hint of color, glittered up the crowns and attached them and the butterfly wings to the children.
While they were drying, I stuck a gear and a watch part on the bird where the eye should go, and glued on a flat back crystal to the center of the stack.

I positioned the pixies where I wanted them on the birds and glued them on.
After centering the bird on the board, I removed the remaining paper  from the foam tape and stuck the bird down, making sure I left room at the bottom for the little 'sign' under each piece.
I made little plaques and glued them on bits of cardboard and they got the same ink pad treatment as the boards and birds did.
I glued them on after carefully placing them where I liked them.

I glued the velvet ric rac around the edges of the board, but if you're using chipboard, inking the edges of the board is probably a sufficient finish, unless you have some dainty ribbon.
The brass filigree was cut and added as an afterthought and attached directly to the board behind the bird on 'Strange Bird' and the remaining scrap glued to the tail of 'Odd Bird'.
I used some flat back crystals inside the birds on top of the watch gears just, ya know, because I like a little sparkle.
The last details were added with white acrylic paint, and I used a small paint brush to dot around the eyes and wherever I thought looked pretty!

I'm happy to answer any questions you might have about these little guys...feel free to e-mail me.
Thank you for hangin' out long enough to get this far!
:-)

Here's a little something extra I made with some bits I had on hand. 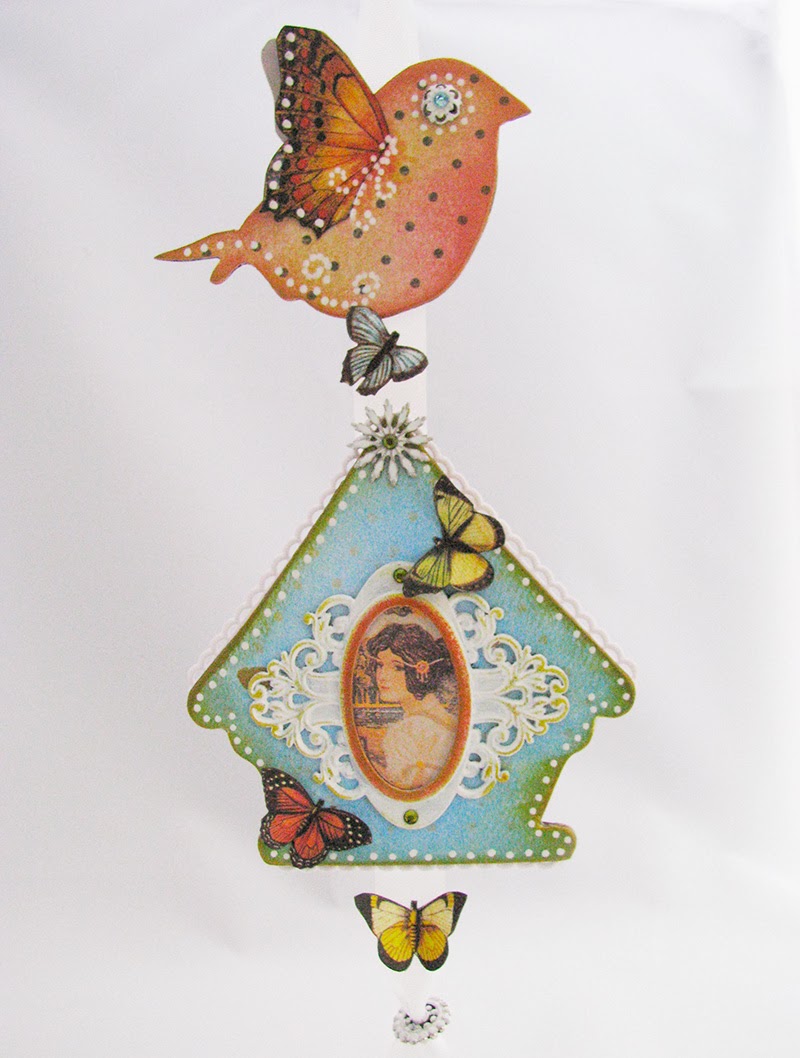 Recently, I was in a swap with the extraordinary pottermouth who made this wonderful ATB for me.
I pondered what to make her....I knew she liked Harry Potter, but I didn't want to make something everybody else had, so I started to ask myself a lot of, 'what if?' questions about events and objects in the books.
The one that stuck with me was this one; what if shards of the Philosophers Stone survived and were saved by Dumbledore? What would he do with them?
I think he would honor the memory of his old friend Nicholas Flamel and put them in a beautiful box, a reliquary.
Not long ago, I visited the National gallery and was blown away by an exhibit of byzantine art. There were a couple things that I was particularly fascinated with - the Madonnas and the beautifully made reliquaries. (and oh, my gawd, the jewelry! But that's another post)
There's no doubt that the major influence on my making this one was that exhibit.

I used a chunk of butternut cut to ATB size. I cut the front off, cut that in half and hollowed out the inside of the remaining chunk. I hung the doors with hinges and proceeded to wood burn the heck out of the whole thing.
The idea behind all the Celtic knotwork sprouting branches and leaves was that the Philosopher's Stone was the main ingredient for the elixir of life, so the wood would be almost compelled to sprout and blossom.
And of course Dumbledore would have the Hogwarts crest emblazoned on the front! 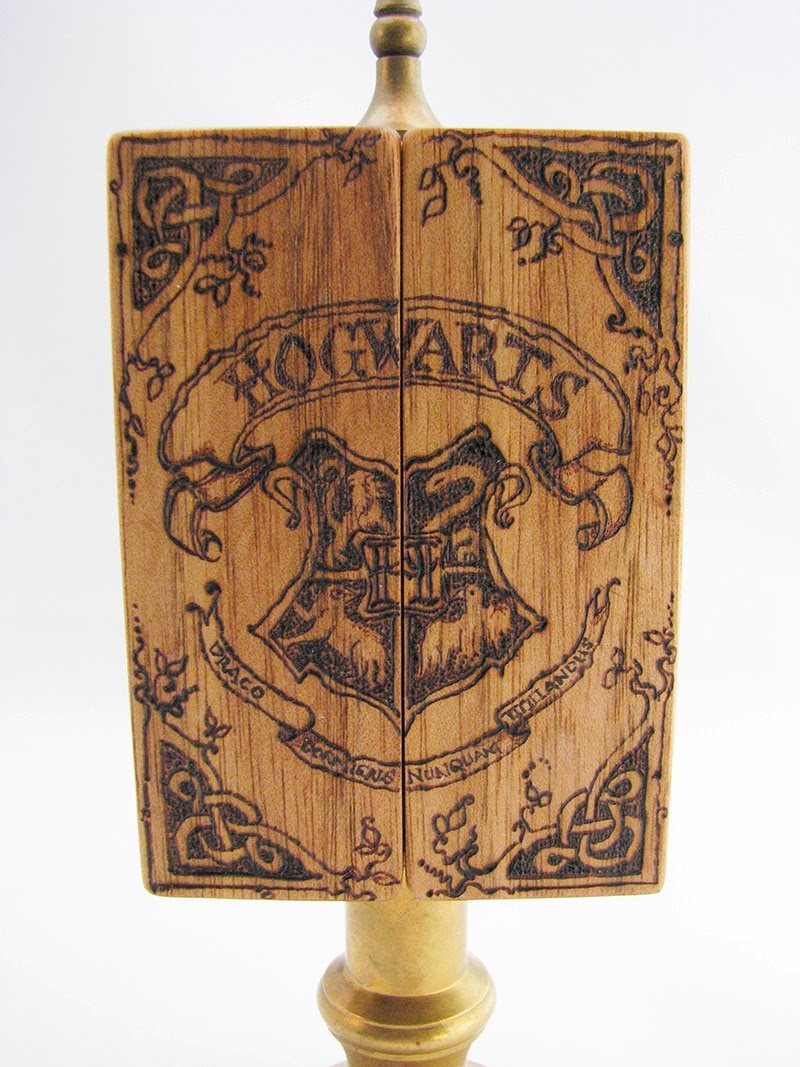 The wee bottle is filled with a bunch of Czech glass beads that I pulverized with a hammer. The bottle can be removed to reveal two larger shards of the stone inset in the wood. 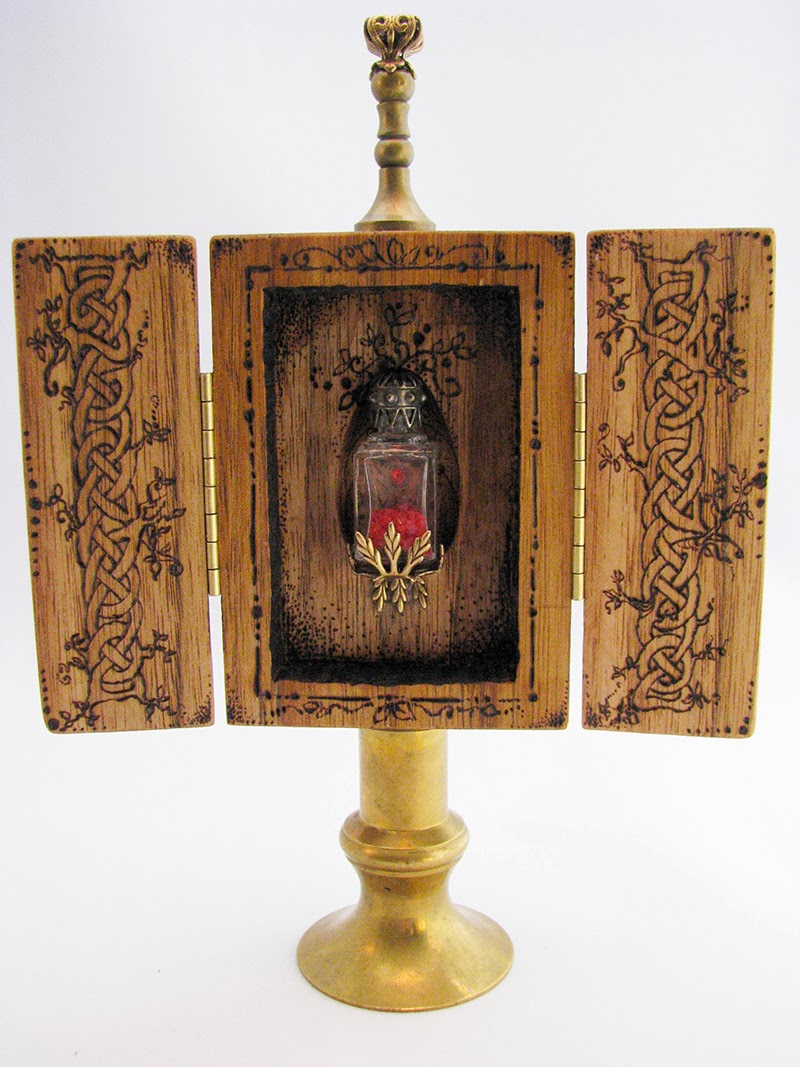 The wood was finished with a mixture of beeswax and mineral oil.
A detailed view of the back: 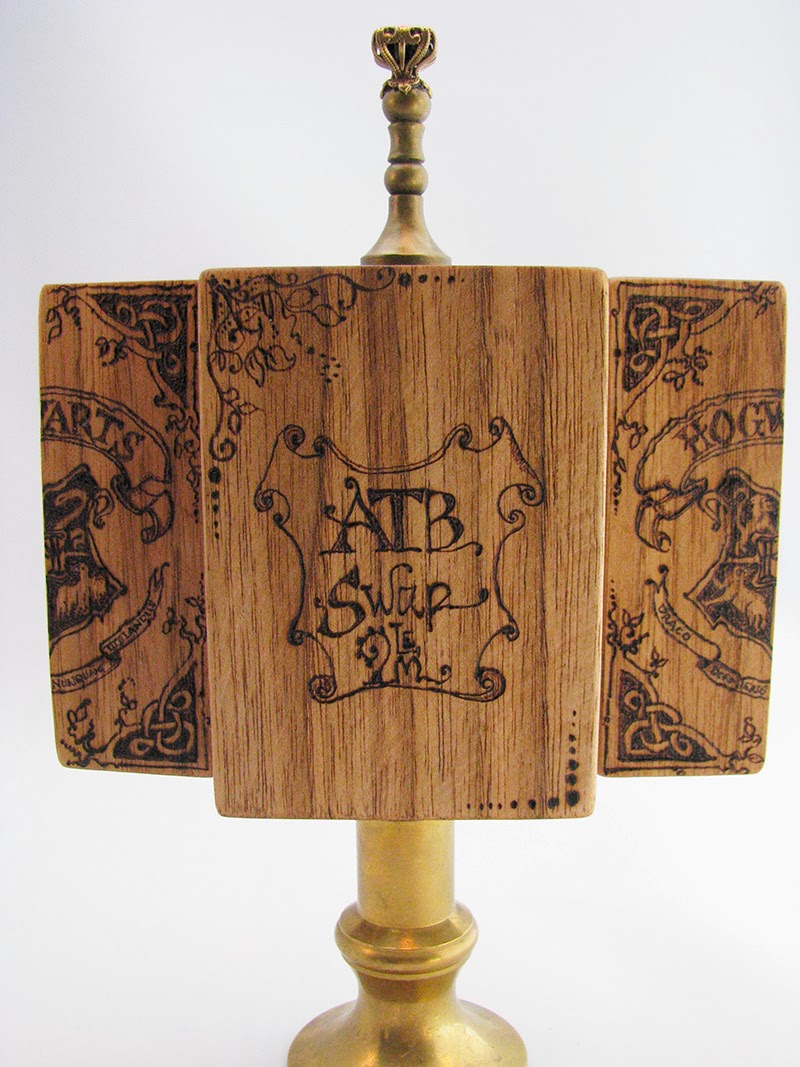