Hello everyone, having a go with the new Simple Shrine from Alpha Stamps.
Oooh, this piece is kind of mysterious. In my mind the alchemist is using the oracle for calculating his transformational formulas. The planetary dials moving in sync with each other creating whispering harmonies, stopping at certain curvatures and creating patterns for the alchemist to study.
Or maybe......
The mouse is the oracle. Sitting on his stool, interpreting the rotations like a fortune teller or a Tarot reader.
That is one smart mouse.
Hey, stranger things can happen. 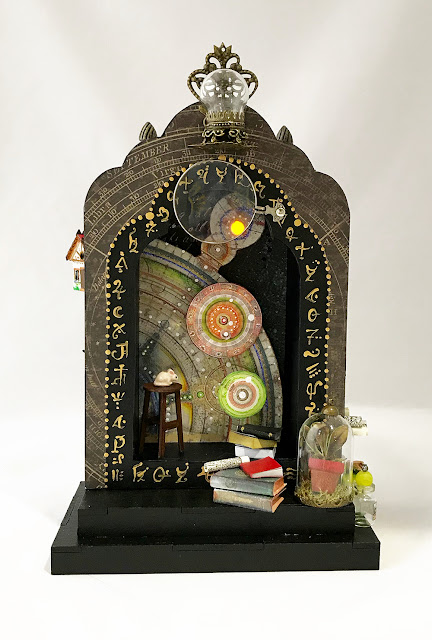 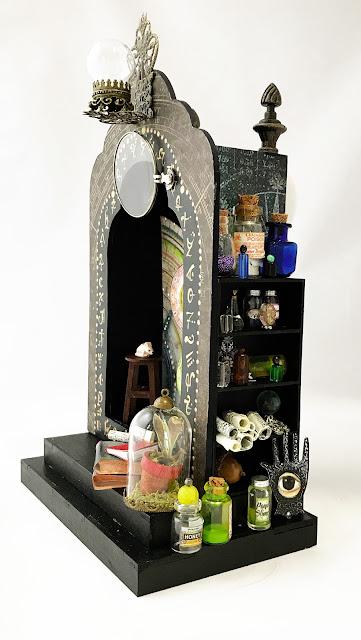 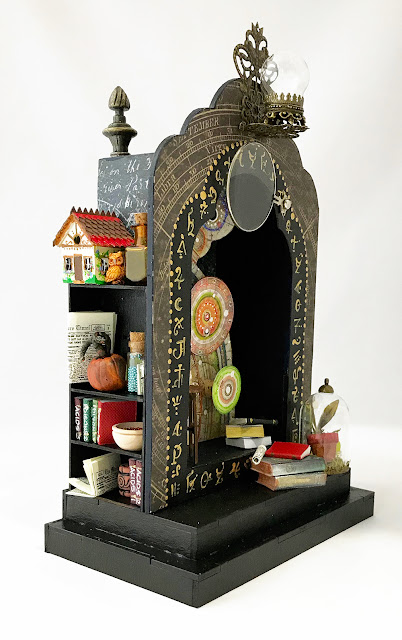 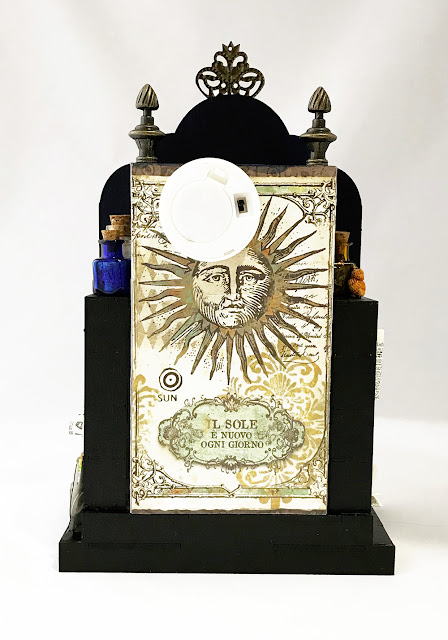 I started out with the Simple Shrine. 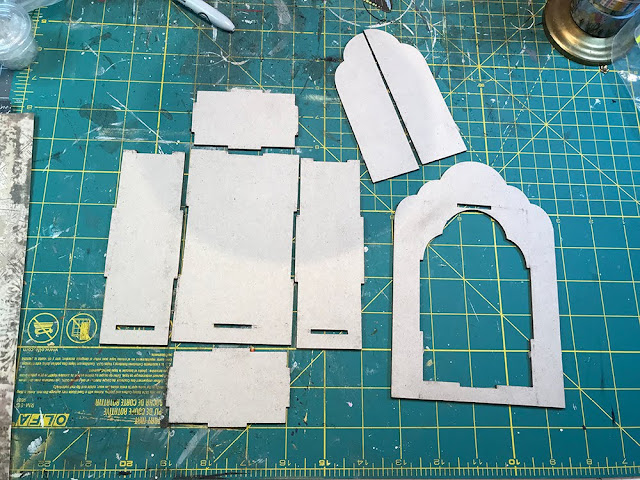 I dry fit it together, then took the front piece off and glued the actual box together. 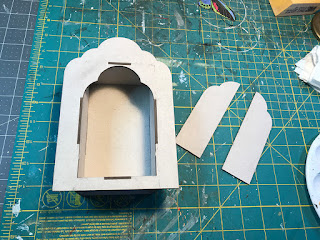 I painted the inside of the box a blue-black, cut some starry paper for the background and some bits from a beautiful sheet of paper from the Alchemy 12x12 scrapbook paper pad. 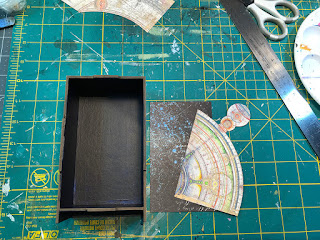 I pumped up the color on the compass-looking paper using colored pencils. You can see the difference in the photo below. 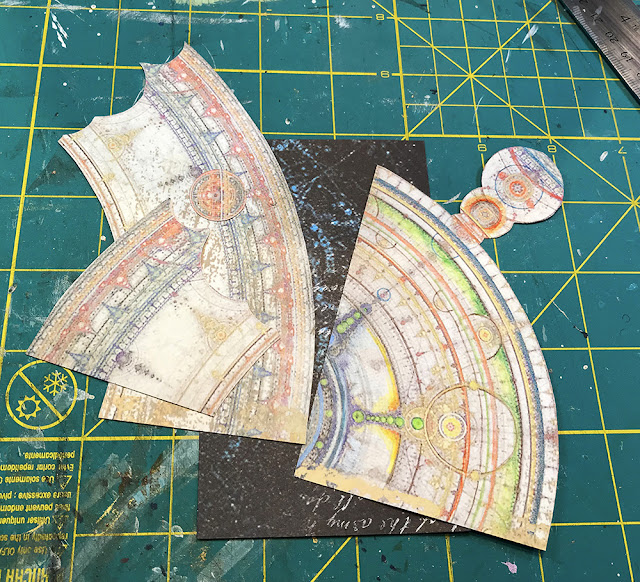 I used the front facade of the the Simple Shrine as a template and cut paper out for it. I glued up and painted the Stairstep Shrine Base Small (no feet) black and painted a narrow edge around the facade with the intention of painting some made up runes on it as a border. I didn't like how narrow it was widen it, opting to use the doors on the back of the shrine. 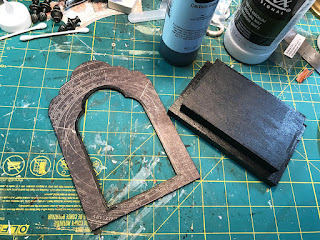 I drilled a hole in the back of the box (after gluing my chosen papers on the sides and back) to allow for the tea light flame to stick through.
Right after I did that I realized that the doors would not fit properly, so I decided not to use them. Too bad, because I had a fun thing I was going to do. Ah, well. Save it for next time! 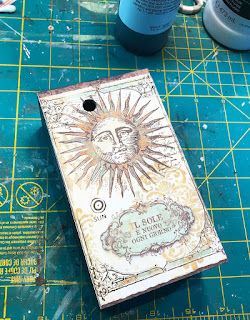 After I glued the box of the Shrine to the Stairstep base, I assembled, glued and painted black 2 1:24 Scale bookcases that I then glued to the side of the Simple Shrine box.
Then after the final fussing was done in the interior and on the outside, the facade was glued on.
The runes are just completely made up. If they say anything it was an accident! (or maybe I was channeling the mouse!)
I used some gorgeous Golden Iridescent Gold (Fine) paint to do the lettering. 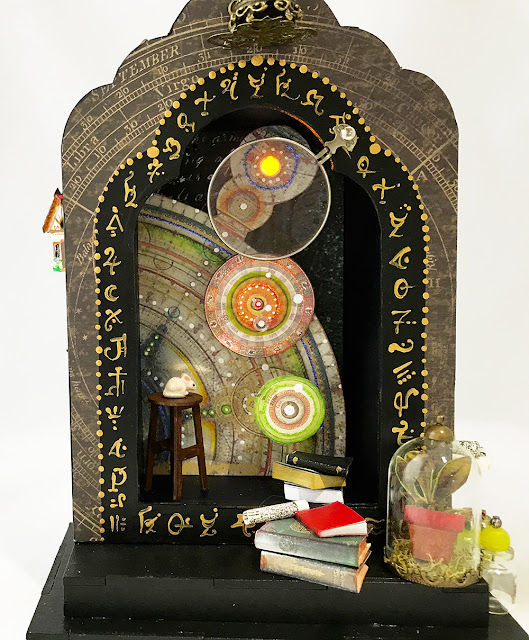 The monocle was put on by drilling a small hole and attaching it with a brad. It can swivel up and down, which I thought was fun.
I placed it so that it magnified the tea light. And I did it BEFORE I glued the facade on the front. Everything that was done to the facade I did before the final glue down.
After that final bit of engineering was done, it was just making and placing stuff and having fun with arranging it all.
The plant under the dome is a Tiny Wooden Flower Pot I painted brown with a Copic marker, cut some leaves out of a random wee scrap of paper and glued them in with some moss.

The 'shelf' that the dome is resting on at the top of the shrine is a piece of filigree that I bent to shape and glued on the facade. Easy peasy!

For a link to all the supplies used in this piece, click HERE