Out in the countryside far away from the noise of the village, nestled in it's own copse of woods is a very large, very grand house. It's been quite a while since the old girl had a butler to open her doors and housemaids scurrying about and a red cheeked cook.
But still, she's a beautiful, if a bit shabby house and is well loved by the family that lives there.
There is no gardener, but the flowers and lawns are cared for as best the family can.
In the copse of woods (the 21st century children of the house have named Follywood) lies, you guessed it, an old folly. Like the big house, it's a bit shabby and a little overgrown but still beautiful. The children love to play there, but there is always an element of awareness to their play. A spicy ingredient of feeling they are being watched. They never see anyone, never feel frightened, but it's a fact that the children never question, having absorbed it into the everyday imaginings of their pretendings and play acting. 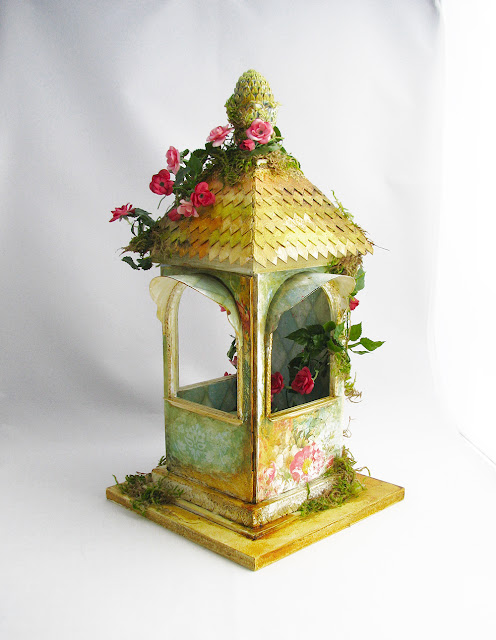 The Folly remains empty, yet it always feels as if someone has just left. 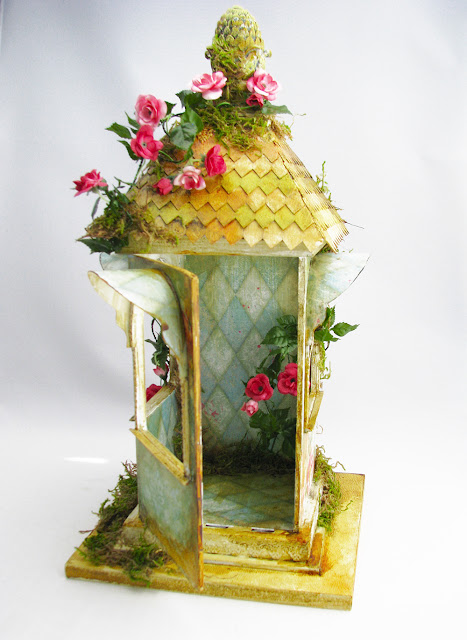 Once in a while late at night, one child will wake the others and they silently watch the light that gently shines from the wood. It's friendly, gauzy warmth embraces them until they begin to feel quite drowsy and stumble back to their beds.
Morning brings sunshine and adventure and the magic moment of the night before is dismissed for a pirate theater and frog catching in the pond.

If they'd followed the friendly light into the wood they might have seen that it was shining through the shingles of the roof. 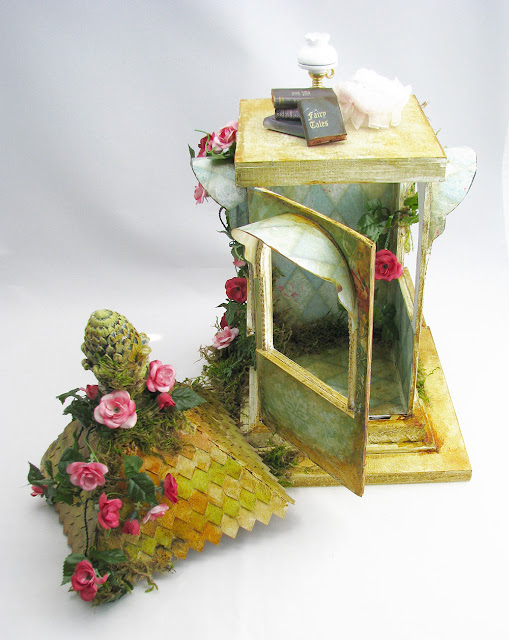 Looks like someone has a comfy little hiding place where they stash their books and read into the night. Fairy tales, a lamp and a cushy stool to sit on. Perhaps a child of another sort likes the Folly for the same reason the others do? Maybe the big old house is home to more than meets the eye!

A Brief Summation of Parts and Details

The basic structure of this folly is from a kit from the awesome folks at Alpha Stamps.
After a dry fit of the basic box, and before I permanently assembled it, I pre-cut the interior and exterior papers, taking into consideration the flangey bits that need to be left bare in order for the walls to fit into each other properly. 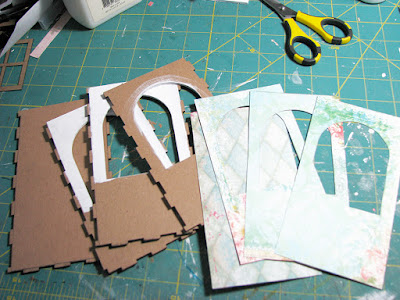 I used matte medium and attached all the papers inside and out and painted the inside walls and ceiling. 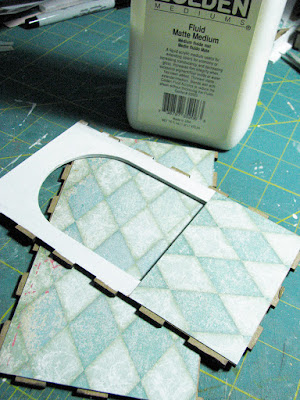 At the last minute I decided I wanted the front to have a door, so I cut off the flanges on the piece that I chose as the door, and the flanges on the two side pieces on the panels that butt up to the door. I used linen book binding tape as a hinge on the inside of the door. I'm so sorry I didn't get a photograph of this part of the process. It wasn't a planned maneuver and I was in the moment.

I also decided that the windows needed awnings and trim. (I did take pictures of this after kicking myself about the door!)
I made a template using graph paper of the shape I wanted the awnings to be and cut them out. 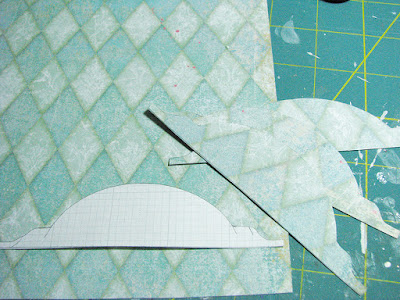 The paper awnings wouldn't have been very sturdy just glued directly on to the window arch, so I cut some thin strips of heavy weight chip board, gently bent them to shape and glued them on the window arches. This gave the awnings a good base to stick to. 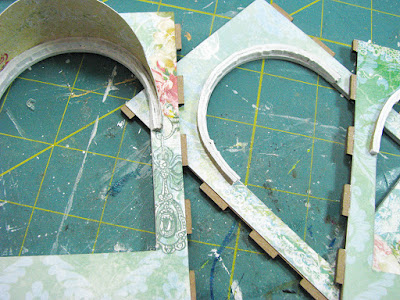 After everything dried, I added some more chip board strips to finsh out the molding on the windows, cut out and glued some wooden doll house trim under the windows and primed and painted all the window trim.

I glued all the parts together and began added Dresden Trim to the windows to disguise the chip board and trimmed out the base of the folly and the shingled roof.
(the shingles come in strips and they're dead easy to apply. You can get them HERE )
After making sure there were no gaps in the corner joins (I filled any there were with wood putty) I painted everything that need touching up inclued all the Dresden trim and then aged the piece using acrylic paints.
This was the result before I started adding the flora. 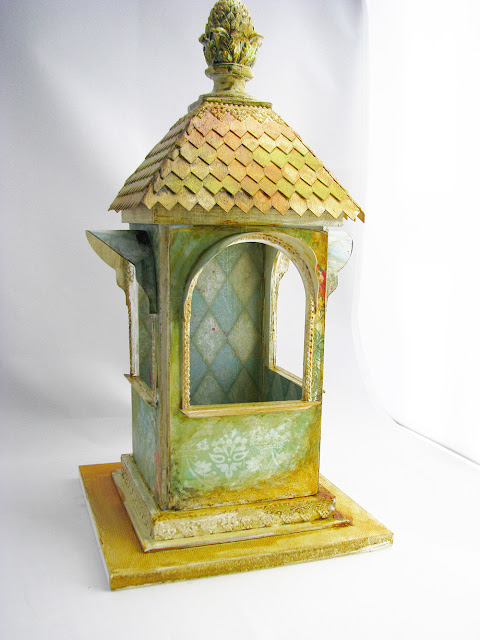 Then it was a matter of bending and gluing lots of pretty rose vines and moss in the spots that pleased me. 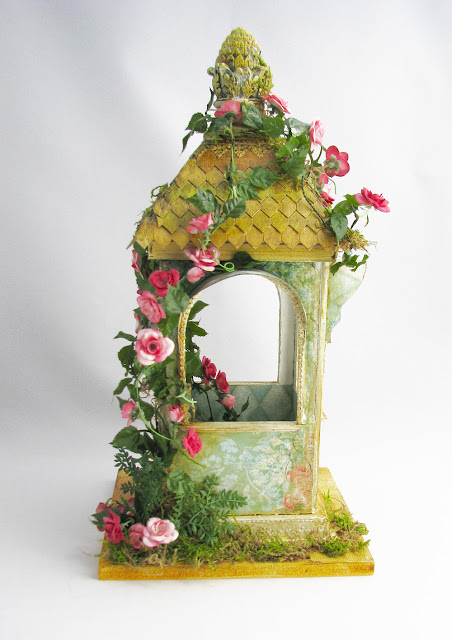 SUPPLIES
For a link to the supplies from Alpha Stamps click HERE. 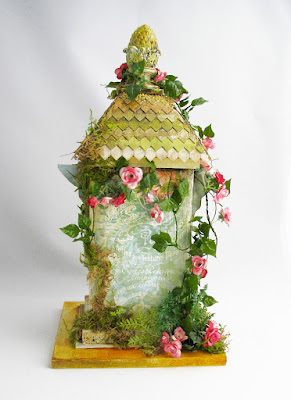 Thank you so much for stopping by!
Posted by L Mahaffey at 8:05 AM 3 comments:

UPDATE: WE HAVE A WINNER!! smokeysmom, drop me an email, please and thank you! GIVEAWAY!!

I'm giving away this cute little house!
Just join the site and you'll be in the running. If you are already a member, just make a comment and you'll be included in the drawing. 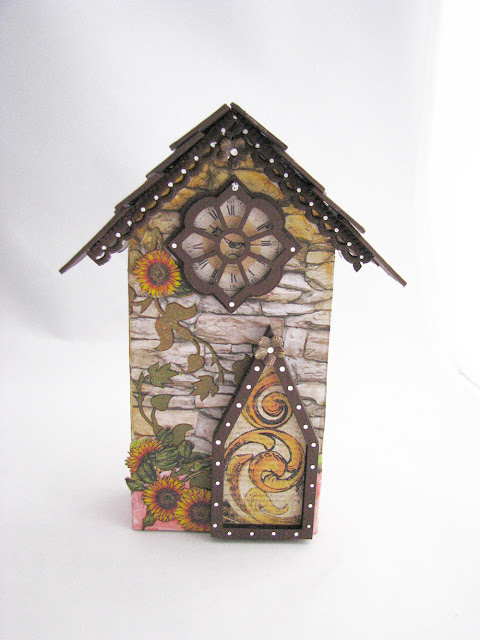 It's a tiny house, about 4.5 inches tall and has a little 'floating' phrase on the inside. 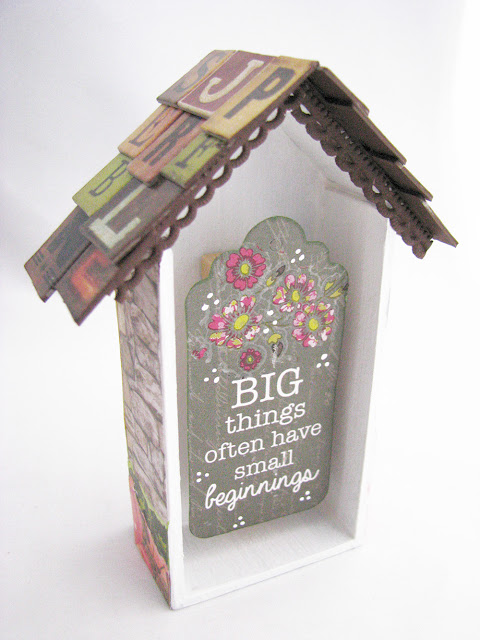 I'll announce the winner on Thursday, March 10th.
Thanks for stopping by!
Posted by L Mahaffey at 1:49 PM 13 comments: